N.J. parents can still cite religion as a reason not to vaccinate kids after bill collapses

Home - Health - N.J. parents can still cite religion as a reason not to vaccinate kids after bill collapses

Religion will remain a valid excuse for children to bypass vaccination laws in New Jersey — at least for now — after state lawmakers Monday failed a second time to muster enough support to pass a controversial bill that would have repealed the option that thousands of the state’s families used last year.

With hundreds of parents once again staging a high-decibel protest outside the Statehouse in Trenton, a planned vote on the latest version of the legislation was called off because leaders in the state Senate fell one vote short on the last day of New Jersey’s two-year legislative session.

But the bill’s Democratic sponsors vowed that the fight to repeal the religious exemption isn’t over. They said they will reintroduce the measure Tuesday, when a new legislative session begins at noon. The public hearing and voting process, however, will have to start over.

“We’re ready to go to war over this,” state Senate President Stephen Sweeney, D-Gloucester, told reporters after Monday’s voting session at the Statehouse in Trenton. “We will pass this bill. This is about public health. It’s about protecting people.”

The decision to abandon the measure is a win for the thousands of vaccine-wary families who have flooded lawmakers’ office phone lines and protested loudly at the Statehouse four times since December.

The bill (S2173) would have eliminated religion as a recognized reason for parents to avoid getting their children the vaccinations required to attend day care and schools in New Jersey. It would also give the state Health Department the authority to define what would qualify as a medical exemption.

But opponents claimed the bill is a dangerous government overreach and would have usurped their rights as parents and violated their freedom of religious expression.

Hundreds gathered in the courtyards outside the Statehouse again Monday as the Senate huddled hours behind closed doors to debate the bill. They cheered wildly after the session ended around 6 p.m. without a vote on the measure.

“Thank you, God!” they chanted from the gallery above the Senate chamber.

The vaccine bill will not get a vote today. But top lawmakers have vowed to vote on it next legislative session. https://www.nj.com/education/2020/01/bill-to-eliminate-religion-as-reason-not-to-vaccinate-kids-dies-after-failing-to-win-support.html …

N.J. parents can still cite religion as a reason not to vaccinate kids after bill collapses

This was the jubilant reaction from the protesters in the state Senate gallery. 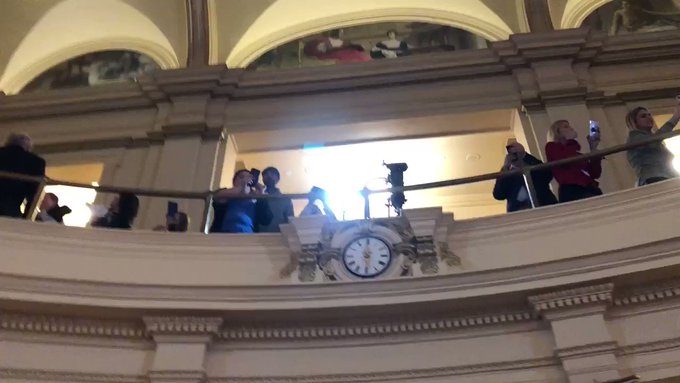 Sue Collins, co-founder of the New Jersey Coalition for Vaccination Choice, said this was “a victory for both religious and medical freedoms” in the state.

“There is a lot of work to be done now to formulate legislation that will truly improve public health,” Collins said. “This bill would not have achieved that and would have stripped fundamental rights.”

Since 2008, state law has required parents only to write a letter to their school district saying vaccines violate their religious beliefs without specifying how. The relative ease of the request enabled nearly 14,000 New Jersey children to get the exemption in the last school year, according to state education data.

Concern about the vaccination rate grew last year after an outbreak of measles was reported in Rockland County, N.Y. and New York City, where more than 70 percent of the 1,282 cases in the nation occurred, according to the U.S. Centers for Disease Control and Prevention. In 61 of these cases, patients were hospitalized with complications, including pneumonia and encephalitis, the CDC said.

In New Jersey, there were 19 cases of measles, with most concentrated in Ocean County, according to the state Health Department.

“Immunizations are regularly monitored and undergo surveillance to ensure safety. Due to their effectiveness, many diseases known to have a devastating, sometimes fatal, effect on children, such as polio, were nearly eradicated in our country,” Amisha Malhotra, a pediatric infectious disease expert and associate professor at Robert Wood Johnson Medical School, said in a statement Monday in support of the bill. “Ensuring that all children who are able to receive vaccines do, safeguards the health of all children.”

Monday was the second time in weeks that Senate Democrats failed to sway enough members to pass the measure. A planned vote on an earlier version — which would have applied to all the state’s day care centers and schools — fell apart amid protests on Dec. 12.

But last week, sponsors convinced Monmouth County Republican Declan O’Scanlon to vote yes. O’Scanlon agreed as long as the bill was changed to give privately run day care centers and schools in the state the option to accept unvaccinated children.

The amendments to the bill passed both houses of the state Legislature last Thursday.

But the changes quickly created new problems. Detractors said the legislation gave affluent families who could afford tuition a choice, but not lower-income families. By Friday night, NJ Advance Media reported the bill was in trouble again.

Sweeney said Senate leaders brought in three medical doctors to meet with lawmakers before Monday’s session to argue why the bill is needed.

But as of noon Monday, two legislative sources said the amendments drove some lawmakers away.

“The question now is what happens next.” O’Scanlon said. “We should all hope that the issue of resurgent, vaccine-preventable diseases will simply go away, as has been predicted by the folks who opposed the bill. God willing that’s the case. But our experience to date suggests that’s not likely.”

“The science is settled,” she told reporters after the session.

“They can stand outside and ring sirens and beat pots and believe what they want to believe, but our responsibility is to protect the larger residents of the state of New Jersey,” Weinberg added.

“We’re gonna attack it with medical experts, putting facts out,” he said.

“We’re gonna start attacking this issue a hell of a lot different,” @NJSenatePres says. “This is about public health. It’s about protecting people.” 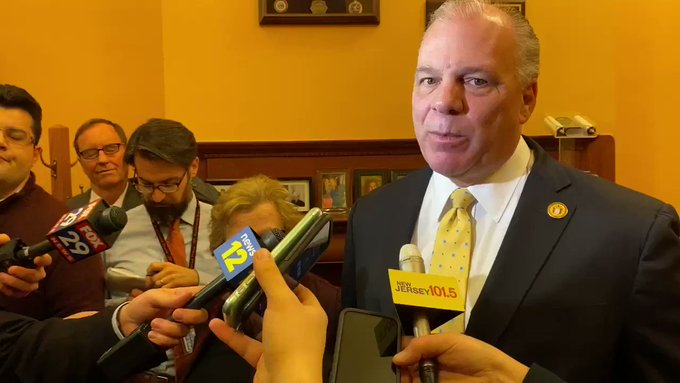 204 people are talking about this

Sweeney also dismissed the idea that he might have misread the appetite of the public the Legislature for removing the religious exemption.

“There’s 9 million people in the state,” he said. “You’ve got a couple thousand people out here. And some of them aren’t from here. You can’t just bend to pressures when you have real public health policy to deal with. This is a real issue.”