As Australia experiences an earlier than usual influenza outbreak combined with a five-year high in measles cases, health regulators have warned that health professionals who spread anti-vaccination messages will be disciplined.

The Australian Health Practitioner Regulation Authority [Ahpra] along with 16 national health boards have released a statement warning practitioners that they had a responsibility to the public to promote evidence that vaccines are safe and effective.

Already in 2019 there have been 35,204 laboratory confirmed cases of influenza, about half the total number of cases for 2018, and by April there were 83 measles notifications compared with 103 for the whole of 2018. The pharmaceutical company GSK has had to bring in extra vials to cope with an increase in demand following the measles outbreak, but this shortage will not affect vaccine availability to children under the National Immunisation Program.

The Ahpra chief executive, Martin Fletcher, said he was concerned that some health practitioners, including doctors, nurses and chiropractors, were promoting anti-vaccination views on social media or in their practices. While much of the measles outbreak has been due to unknowingly under-vaccinated people travelling overseas and returning with the virus, rather than due to deliberate anti-vaccination, Fletcher said medical professionals must not spread false information. 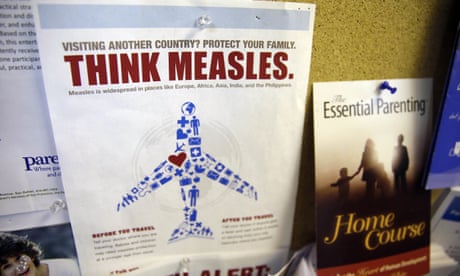 “We take seriously any case of practitioners spreading dangerous and misleading anti-vaccination information including on social media,” he said. “They will face regulatory action or prosecution. We are asking the public to tell us if their practitioner is doing this. If you raise your concerns with us we can investigate and protect others.”

Fletcher’s statement has been met with scepticism with a spokesman for the group Friends of Science in Medicine, Ken McLeod, who along with other members of the group have reported hundreds of chiropractors, along with several doctors and nurses, to Ahpra over the past decade for spreading anti-vaccination messages.

“The response from the regulators has invariably been a slap with a damp lettuce, just warning them to fix their advertising, or a warning not to mention vaccination to their clients,” McLeod said.

”If Ahpra and other regulators had responded properly to our notifications, today’s picture would be different. Because this is more than just false-advertising. I consider it medical malpractice.”

Chiropractic Board of Australia chairman Dr Wayne Minter said patients seeking vaccination advice should speak with a medical practitioner in the first instance, before seeking advice from a chiropractor.

“We expect practitioners to provide patients with evidence-based information in accordance with established guidelines for vaccinations,” he said. 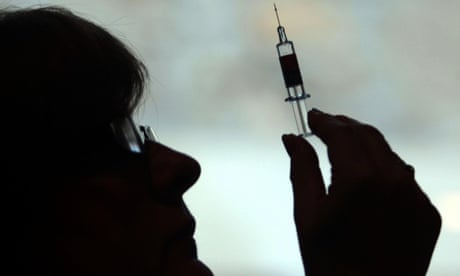 Fighting the flu can be a matter of life and death – so what more can we do?

A professor in the Susan Wakil school of nursing and midwifery at the University of Sydney, Julie Leask, said she commended Ahpra, the Chiropractic Board and other regulators who had called on their members to promote vaccines. She said while other members of the public who spread anti-vaccination messages may not have widespread influence, anti-vaccination messages spread by health practitioners could be particularly influential and harmful.

“Speaking as someone that has researched how parents make decisions about vaccination, it’s very clear that medical professionals have a powerful role to play in this … a specialist saying a vaccine may cause harm with no evidence can set people on lifelong path to being anti-vaccination.”

But she said health professionals who did support vaccination had a duty-0f-care too. Too many were missing opportunities to promote vaccinations, for example to patients about to travel overseas, and she said many parents had not been made aware by their child’s paediatrician or doctor that the influenza vaccination is now recommended for all children aged from six months to five years old. Anyone with a co-morbidity, such as diabetes or asthma, that could make the virus worse should also be vaccinated.

“However we also need to remember that when it comes to promoting and providing vaccinations overall, Australia does a really good job,” Leask said. “We just need to make sure opportunities aren’t missed to promote them.”

… we’re asking readers, like you, to make a new year contribution in support of the Guardian’s open, independent journalism. This has been a turbulent decade across the world – protest, populism, mass migration and the escalating climate crisis. The Guardian has been in every corner of the globe, reporting with tenacity, rigour and authority on the most critical events of our lifetimes. At a time when factual information is both scarcer and more essential than ever, we believe that each of us deserves access to accurate reporting with integrity at its heart.

More people than ever before are reading and supporting our journalism, in more than 180 countries around the world. And this is only possible because we made a different choice: to keep our reporting open for all, regardless of where they live or what they can afford to pay.

We have upheld our editorial independence in the face of the disintegration of traditional media – with social platforms giving rise to misinformation, the seemingly unstoppable rise of big tech and independent voices being squashed by commercial ownership. The Guardian’s independence means we can set our own agenda and voice our own opinions. Our journalism is free from commercial and political bias – never influenced by billionaire owners or shareholders. This makes us different. It means we can challenge the powerful without fear and give a voice to those less heard.

None of this would have been attainable without our readers’ generosity – your financial support has meant we can keep investigating, disentangling and interrogating. It has protected our independence, which has never been so critical. We are so grateful.

The Failure of the Influenza Vaccine According to the Medical Literature

Some Victorians can’t be vaccinated against infectious diseases.

The silent threat of the coronavirus: America’s dependence…

A Federal Ban on Making Lethal Viruses Is Lifted

Globalists Look To Exploit Coronavirus In Push For Global Government

Good News For Americans: As Citizens Stand Up to Big Pharma, Legislation Follows

The silent threat of the coronavirus: America’s dependence on Chinese pharmaceuticals

Are There Right-Wing Snowflakes Now?

A Federal Ban on Making Lethal Viruses Is Lifted

Globalists Look To Exploit Coronavirus In Push For Global Government

Good News For Americans: As Citizens Stand Up to Big Pharma, Legislation Follows